Subject to consent being granted, construction of Gate Burton Energy Park could start in early 2025. We estimate it would take between two to three years to build, with the site potentially being operational from early 2028.

The operation of Gate Burton Energy Park is expected to be around 60 years, while decommissioning is expected to take between two to four years and would be carried out in phases.

Delivery of the solar energy park and cable route will involve:

Our studies have considered potential impacts on residents associated with transport, noise, vibration and dust during construction, as well as operation and decommissioning. Measures have then been identified to keep disruption to local communities and effects on the environment to a minimum.

During construction, core on-site working hours would be 7am to 7pm Monday to Friday, and 9am to 1pm on Saturdays. During the winter months weekday working would be 8am to 6pm on account of reduced daylight hours.

Work may occasionally take place outside these hours/days, particularly if there is activity which needs to be conducted continuously. For example, cable joining or Horizontal Directional Drilling (HDD). Other non-intrusive works such as installation of PV modules may take place over longer periods during the summer months.

For the grid connection, it is expected there will be two access points; one off the A156 south of Marton and one off Cottam Road west of Cottam Power Station.

Across the full extent of the project site, during the peak construction period worst case scenario estimate is that there would be up to 60 HGV deliveries per day (120 movements). Deliveries will come directly to the compounds, with kit and equipment then being transported within the site to minimise impact on the local road network.

We anticipate HGV movements would be restricted to specific routes and reduced during certain times of day (for example between 7am and 9am, and between 5pm and 7pm).

When the energy park becomes operational, activity on site would be limited mainly to vegetation management, equipment maintenance and servicing, periodic replacement of components, fence inspection and general monitoring to ensure the continued effective operation of the scheme.

A team of up to 14 full time staff are anticipated as being employed – working on a site and flexible office basis – with them travelling to site using four-wheel drive vehicles or vans. Operational access would be from Gainsborough Road (A156), via Clay Lane.

Gate Burton Energy Park is expected to operate for around 60 years so permissions granting its consent will be temporary. When this time has lapsed, the land would revert back to its original use for agriculture.

If equipment is still operating successfully and safely it might be that we chose to operate beyond the original anticipated lifespan.

Any extension to the operational life of the project beyond 60 years would be dependent on new negotiations with landowners and new planning consent.

Decommissioning is expected to take between two to four years.

It would be conducted in phases with panels and other associated technology being removed for recycling and disposal in accordance with good practice and market conditions at the time.

Buried medium voltage cables would be either removed or left in situ (below plough depth). The future of the substations and associated control buildings would be agreed with the relevant Local Planning Authorities prior to decommissioning.

The effects of decommissioning are usually similar to or of a lesser magnitude than construction effects. However the specific methods used to decommission the project at the end of its operation life will be informed by evolution in engineering approaches over the lifetime of the project.

We are committed to reducing the environmental impact from decommissioning and we will look into ways to recycle material from solar panels wherever possible.

There is rapid growth in research and new technologies for the more efficient recycling of solar panels. We will review any new advancements when the Gate Burton Energy Park reaches the end of its operational phase.

In most cases, 99 per cent of a solar panel is recyclable, and there are well established industrial processes to do this.

A solar panel is made of a frame (typically aluminium), glass, crystalline silicon solar cells, and copper wiring, all of which can be extracted, separated, and recycled or reused. The remaining one per cent is an encapsulant material which bonds the layers of a panel together.

Solar Energy UK Briefing; Everything Under the Sun – The Facts About Solar Energy (March 2022) 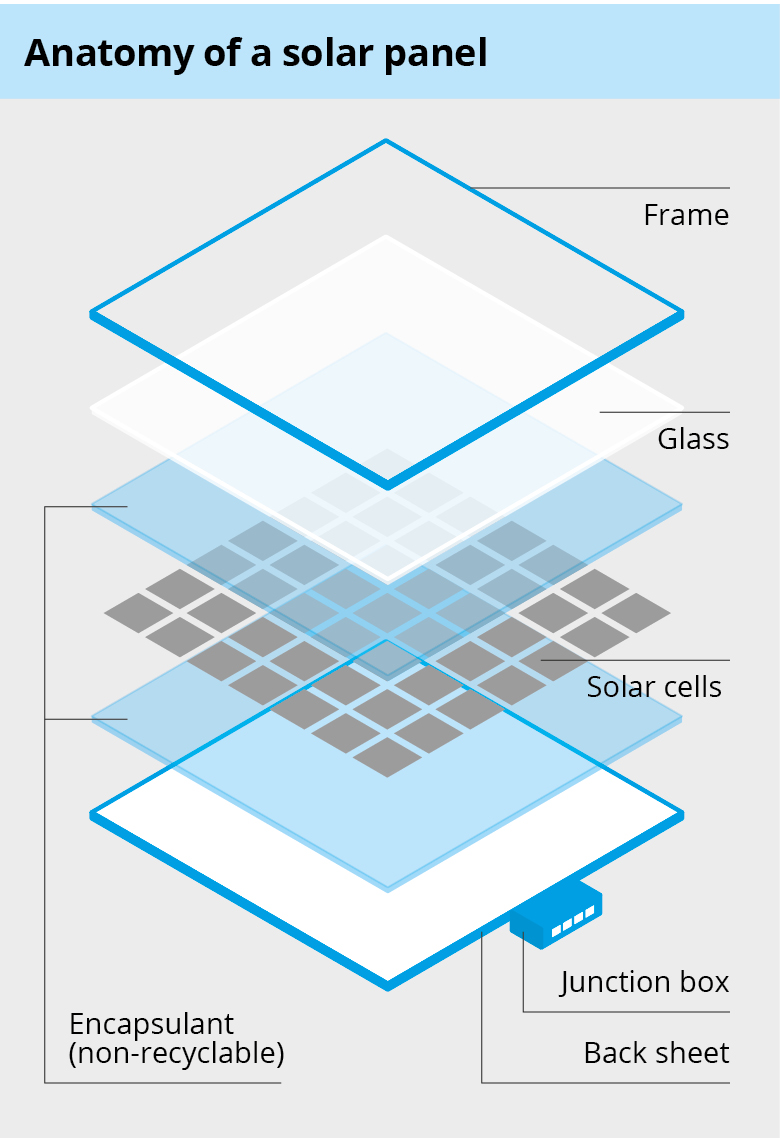 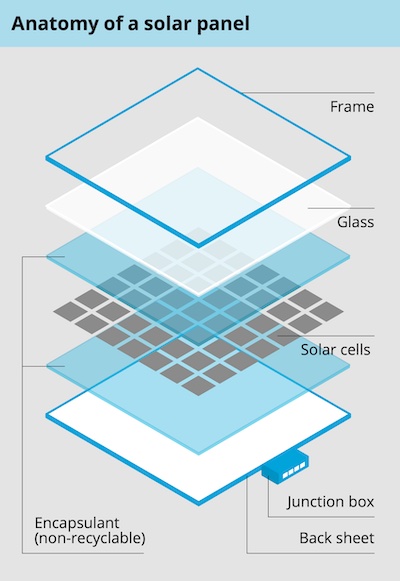 Anatomy of a solar panel